Lunch with an Astronaut

RESTAURANT REVIEW:
As a travel writer I’ve met my share of million mile airline members and platinum level frequent flyers, but I recently dined with a man who undoubtedly has flown more miles than anyone I’ve ever met.
Charlie Walker, veteran of three space missions, and I were introduced before he spoke at the Kennedy Space Center’s Lunch with an Astronaut program.  Charlie was very personable and willing to share his experiences.
The luncheon began with a slideshow, Charlie's aptly chosen topic:  Food in Space.
Anyone old enough to remember the first Mercury 7 astronauts may recall space food in squeeze tubes. Certainly not a meal I'd enjoy, but these were men who had the right stuff and were boldly going where no man had gone before.  They were so busy in their cramped space capsules their food didn’t really matter.
The Gemini and later Apollo flights to the moon had more palatable provisions. Astronauts drank what became a popular instant orange drink called Tang. They nourished their bodies with freeze-dried foods like stew or pot roast.  At mealtime an astronaut would inject water through a syringe to rehydrate the packaged contents. Charlie’s photos didn’t make these meals look appetizing either.
By the late 1990's, NASA had established a space station and the food onboard was more normal.  Charlie told the story of a crewmember of Mexican decent who chose tortillas for his menu. When the other astronauts saw how easily he managed to roll up his lunchmeat or breakfast eggs, future missions included burritos and tortillas. 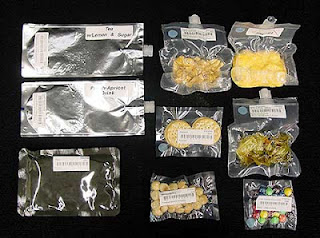 More recent flights used trays with Velcro corners to secure meal containers and magnets to restrain utensils in the weightless environment.  The quantity of  fresh food has remained scarce and the overall quality was never intended to be gourmet.
The Lunch with an Astronaut program also includes a question and answer period.  Kids in the audience particularly enjoyed asking Charlie about the sensation of  flying in space and his favorite memories.
Visitors to the Kennedy Space Center can attend Lunch with an Astronaut for an additional fee.  The buffet offerings are fresh, healthy and quite delicious. No space food or fast food is served.
Price is $24.99 for adults and $15.99 for children ages 3-11, in addition to admission.

If you would like to meet an astronaut, you can make reservations online or call 866-737-5235.
Seating is limited.
Click here to view the program menu.
Seating begins at 12:00 p.m. daily. Briefing runs approximately 1 hour.
Read this and other food blog stories on Wanderfood Wednesdays.

Posted by Bylandersea at 3:29 PM