If you visit Scotland, you ought to try haggis. I admit the recipe sounds pretty disgusting. Perhaps you shouldn’t know what goes in it...or maybe you should. Miriam-Webster defines the concoction as a traditional Scottish dish consisting of the heart, liver, and lungs of a sheep or a calf minced with suet, onions, oatmeal, and seasonings and boiled in the sheep's stomach. Yuck, I thought.

However, once I arrived in Scotland, I embraced my usual ‘when in Rome’ philosophy. Okay, I’ll try it. After one bite I declared, "Surprise, surprise," like Gomer Pyle on television. I devoured the rich beefy delight.


My love affair with haggis began at Gleneagles, one of the finest golf resorts in the world. The chef out did himself preparing my group's gala meal. However, it was my dinner in Edinburgh, Scotland's capital city, where I witnessed royal pageantry.

As I approached the five-star Balmoral Hotel, melancholy sounds of a lone bagpiper pierced the night air. The tall piper, Iain Grant, wore the traditional regimental attire of the Scottish Highland Pipers: a red tartan kilt and fabulous plumed hat of black feathers. Iain is the epitome of a Scotsman and happily reappeared during the presentation of the culinary treat. 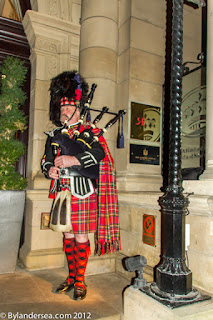 At a true Scots party haggis is not eaten until addressing it. The ceremony begins the meal and is usually performed with dramatic flair. At the Balmoral, the costumed bagpiper marched in followed by the chef carrying a decorative platter featuring the haggis. The two strode round the dining room as the seated guests raised a glass of Scotch whiskey. “Sláinte (slahn-chə),” we said, the equivalent of “cheers” and means to your health.

Then, in thick Scottish brogue Iain recited the Address to a Haggis, written by Robert Burns in 1786. During the reading, he spanked the delicacy, wielded his knife and stuck it into the dish. (See video) He teased the audience as only a bawdy man clad in a skirt could. We laughed and eagerly awaited a taste.


Finally, plates of haggis appeared towered by "neeps and tatties”- mashed turnips and potatoes to be eaten along with “nips," of whiskey. Bravo. While my host referred to drinking a wee dram, I believe I consumed more than that.

In my opinion, the national dish tasted similar to Cajun boudin without rice, a regional food I once tried in Louisiana. The topping of mashed potatoes blended sensationally, like meatloaf with taters -- a perfect accompaniment. The smooth and beefy dark gravy tingled the tongue with an all over mellow and warm taste, of course, aided by another sip of the whisky.

I so enjoyed the haggis; I decided to celebrate Robbie BurnsDay on January 25th, the traditional date recognizing the national poet. However, haggis is very difficult to come by in the US due to USDA standards. I eventually ordered two cans through Amazon.com.

My Burns Supper menu will feature the customary fare: Cock-a-Leekie Soup, a chicken soup, haggis with a small steak, and clootie, a steamed pudding for desert. Here’s to Robbie Burns and his affinity for words, women, and haggis! Sláinte to all.

The Address to a Haggis

Fair fa' your honest, sonsie face,
Great chieftain o' the puddin-race!
Aboon them a' ye tak your place,
Painch, tripe, or thairm:
Weel are ye wordy o' a grace
As lang's my arm.

The groaning trencher there ye fill,
Your hurdies like a distant hill,
Your pin wad help to mend a mill In time o' need,
While thro' your pores the dews distil
Like amber bead.

His knife see rustic Labour dight,
An' cut you up wi' ready sleight,
Trenching your gushing entrails bright,
Like ony ditch;
And then, O what a glorious sight,
Warm-reekin, rich!

Then, horn for horn, they stretch an' strive:
Deil tak the hindmost! on they drive,
Till a' their weel-swall'd kytes belyve,
Are bent lyke drums;
Then auld Guidman, maist like to rive,
"Bethankit!" 'hums.

Is there that owre his French ragout
Or olio that wad staw a sow,
Or fricassee wad mak her spew
Wi' perfect sconner,
Looks down wi' sneering, scornfu' view
On sic a dinner?

Poor devil! see him ower his trash,
As feckless as a wither'd rash,
His spindle shank, a guid whip-lash,
His nieve a nit;
Thro' bloody flood or field to dash,
O how unfit!

But mark the Rustic, haggis fed,
The trembling earth resounds his tread.
Clap in his walie nieve a blade,
He'll mak it whissle;
An' legs an' arms, an' heads will sned,
Like taps o' thrissle.

Ye Pow'rs wha mak mankind your care,
And dish them out their bill o' fare,
Auld Scotland wants nae skinking ware
That jaups in luggies;
But, if ye wish her gratefu' prayer,
Gie her a haggis!

Fair is your honest happy face
Great chieftain of the pudding race
Above them all you take your place
Stomach, tripe or guts
Well are you worthy of a grace
As long as my arm

His knife having seen hard labour wipes
And cuts you up with great skill
Digging into your gushing insides bright
Like any ditch
And then oh what a glorious sight
Warm steaming, rich

Then spoon for spoon
They stretch and strive
Devil take the last man, on they drive
Until all their well swollen bellies
Are bent like drums

Then, the old gent most likely to rift (burp)
Be thanked, mumbles Is there that over his French Ragout
Or olio that would sicken a pig
Or fricassee would make her vomit
With perfect disgust
Looks down with a sneering scornful opinion

On such a dinner
Poor devil, see him over his trash
As week as a withered rush (reed)
His spindle-shank a good whiplash
His clenched fist.the size of a nut.
Through a bloody flood and battle field to dash
Oh how unfit

You powers who make mankind your care
And dish them out their meals
Old Scotland wants no watery food
That splashes in dishes
But if you wish her grateful prayer
Give her a haggis!

Posted by Bylandersea at 7:49 PM 1 comments