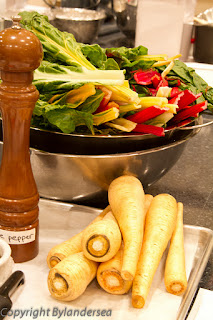 Rather surprising to find an extraordinary French cooking school residing within the four-diamond Osthoff Resort in Elkhart Lake, Wisconsin, but then again, maybe not. Given the interest in food and evidence that many travelers are attracted to culinary classes and tours; it makes sense. The small village of Elkhart Lake (resident population around 1,000) is the quintessential lake resort town. Vacationers descend during the summer and fall bringing a vibrant lifeline to the area. So, building L'ecole de la Mainson in the hotel was a brilliant plan.

Any foodie stepping into the magazine photo feature worthy expanse of granite counter-tops, stainless steel appliances, gleaming white cabinetry, and hanging pots and pans would be ready to roll up their sleeves. But, the school's workshops or one and two day courses also attract couples, girlfriend getaways, tourists, and anyone interested in learning.

At L'Ecole de la Maison you don't sit and watch food being prepared, you pick up a wooden spoon and jump right in. Chef Scott Baker and his team of assistants (kitchen angels in my mind, as they hover around, constantly cleaning) circulate and somehow manage to get everyone started. Each student picks a station where they want to work, and as the class progresses, they find themselves cooking amazing dishes and helping others. 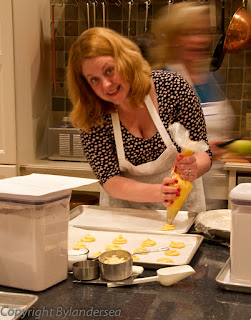 For example, if you don't know how to work a mandoline, you call "Chef," as if you were on a Food Network, and over comes Chef Baker in his dignified white hat.  He instructs and encourages you and any classmates interested in that skill. "Hold the potato like this," he says and demonstrates. Kathleen attempts and voila- it works! I try and it doesn't go as well. I am assured it is a matter of getting used working with the dangerous but awesome slicing appliance.

"Chef," I ask. "How do you properly mince a shallot?"  He shows me how to hold my knife and places my other hand on a corner of the onion. I am told not make any cuts near that end. Ah, ha.  Mincing, I've got it!

Amber's recipe calls for the use of a pastry bag; she's a whiz.  Poor Irene and Staci have to peel mountains of apples and potatoes. I pretend not to notice, as I already know that skill!  Peter digs his hands and arms in bread dough and, with a flourish, glazes the crust with olive oil. 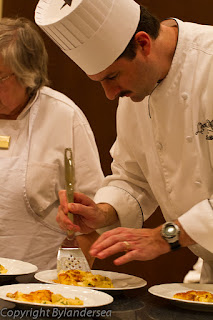 One reason this class is different from most is due to Chef Baker's style and temperament.  He is definitely not Gordon Ramsay.  Chef Baker never gets ruffled, even when his clarified butter overly browns. (He was called away to rescue someone.) Instead, he just accepts the annoyance, and teaches frugality. "Don't throw it out, he says," Freeze the mistake to use in soups or stew." And then...he begins the process again.

In three hours, my class made the most smashing array of food. We received detailed recipes so we can attempt to replicate them at home and impress company for the next few years. My group made all these selections:

What was even more amazing than cooking that repertoire, was the fact that we ate it all!  I must say my Coquille St. Jacques tasted as divine as any I have ever sampled. Possibly the best ever.  Each and every dish was a successful sensation; the right mix of spice, texture and taste.

I had a blast and learned many new useful techniques. If I lived near Elkhart Lake, about an hour from Milwaukee, I would be a regular at L'Ecole de la Maison.


For a course schedule, click here. For more information or to register for courses,
please call (877) 804-8630 or email cookingschool@osthoff.com.
For information about Elkhart Lake: www.ealkhartlake.com or call Toll-Free (877) 355-4278 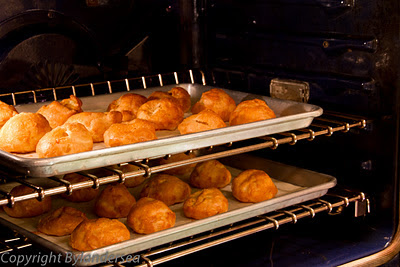 Read this and other food blog articles posted on Wanderfood Wednesdays.

Posted by Bylandersea at 9:19 AM 0 comments


The following review was originally written for Worldwide Delicacies.com.

Oprah Winfrey’s opinion carries a lot of clout and when she picks something as one of her “favorite things,” it usually stands up to any test.  Such is the case with the Key Lime Bundt Cake sent to me from We Take the Cake.

My cake arrived in their signature decorative pink, green and black cake box carefully cushioned in packing materials. The bundt had a round container of glaze in the center hole- which actually helps prevent shipping problems. I then stirred the container of glaze and drizzled it over the top. The smell of tangy lime permeated the air.

When cutting, I found the cake’s consistency was uniform and dense, though lighter than a pound cake. As for the taste:  the flavor was very moist, outstanding delicious, and without a doubt one of the best cakes I have ever tasted.  It was not overly sweet but packed with the citrusy kick of key limes. The bakery pours lime juice on the top as the cake cools. Yum! A forkful melts in your mouth with buttery goodness and creates visions of a tropical paradise.

According to the company literature, all products are made from scratch using fresh eggs and dairy products and individually decorated.  They never cut corners or use any mixes.

I hate to admit it, but I don't think I could bake a cake this good. So,  if I want another bite, I will just have to order one from the online service.

Posted by Bylandersea at 5:25 PM 0 comments