The maritime town of Apalachicola, on the Florida panhandle, 80 miles southwest of Tallahassee, produces 90 percent of the oysters consumed in the state of Florida and 10 percent of the national bounty. Pretty amazing for a mere population of 11,500.

The name Apalachicola comes from indigenous Hitchiti Indians. "Apalahchi," means "on the other side," and "okli," means "people", hence referring to "people on the other side of the river." Today folks like to translate the name of their town to "land of the friendly people." And, I couldn't agree more.

Franklin County promotes the tag-line "A Natural Escape" and it’s spot-on as evidenced by bear crossing signs, undeveloped land and building codes limiting all structures to no more than three stories. While relaxing at this seafood lovers haven on the banks of the Apalachicola Bay, I toured two oystering plants and learned the difficulties of harvesting and handling the succulent mollusks.

Oystermen (and women) typically work in pairs and venture into the bay before sunrise to make their first catch around dawn. They manipulate 40-pound tongs to scrape along the bottom and heft the masses to the surface. By law, the rough looking shells must measure three inches minimum or they go back in the sea. In the early afternoon they hope to harvest enough to make a profitable return to shore. 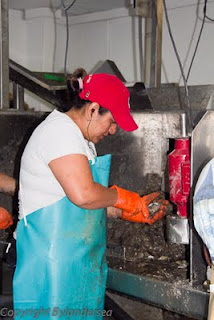 Relationships are everything in the industry and most oystermen sell to a specific supplier on a regular basis. I visited both Barber's Seafood and Leavins Seafood processing plants. When the oysters leave the dock, they must be opened or shucked by hand. No machine exists to do this job; however, a motorized drill pops a small hole in the shell thereby helping the shucker's knife pry the halves apart. The workers perform this tedious, messy and difficult job at their own station, alongside their fellow shuckers. The operation is deafening and the strenuous job causes many to eventually suffer from carpal tunnel syndrome.

Shuckers remove the translucent glob of oyster meat (the consistency is just a bit heavier than egg whites), and drop the empty shells onto a conveyor belt that runs below the shucking stations. The belt runs on, going outside the building where the shells are dumped onto an ever-growing pile. Needless to say, odor develops and many birds are attracted.  In turn, the birds become an attraction as they humorously ride the treadmill belt; hunting and pecking for nibblets of scrap oyster parts.

The buckets (150-200 oysters per ten pound pail) of cleaned oysters are weighed and the shucker is credited for the strenuous effort. The oysters are then rinsed and other employees take over, cleaning, scanning and removing pieces of the shell and preparing for shipment.

At the Leavins plant, the oysters go into a bubbling cold water bath that spews foam like a witch's cauldron. The oysters rise to the top and are scooped out and transferred for final inspection and shell removal. The processed  oysters are then slid into restaurant-supply buckets that are individually labeled with harvest location, date processed and expiration date. 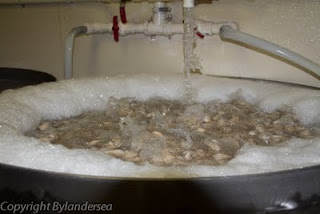 Leavins oysters are also flash frozen with liquid nitrogen gas to maximize shelf life. Some are even frozen in individual compartments- like on half shell- and once thawed out by the consumer, the oysters will appear and taste just as fresh as the day they were caught. 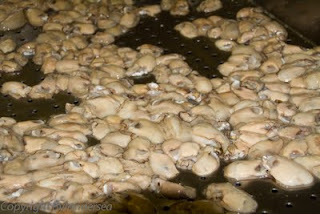 Consuming the delicacy is one of life's special culinary pleasures and there are many ways to fix them.  I personally don't enjoy raw oysters but love them fried or baked with cheese and bacon. I ate some at Captain Snook's that were outstanding. I didn't get their recipe but here's an easy and similar one from the Florida Seafood Board.

Arrange oysters on rock salt in baking dish.  Top each oyster with a teaspoon of cheese, some crumbled bacon and chopped jalapeno to taste.  Bake in a preheated oven for 350 degrees for 10 minutes or until the edges of oysters begin to curl.

Posted by Bylandersea at 11:36 AM 0 comments


Anybody who knows me, knows I love pie- especially fresh fruit pies.  Well friends, I finally did it.  I ordered a piece of pie for breakfast.

I was sipping a mug of coffee in Williams, Arizona, while waiting for the train--specifically the Grand Canyon Railway that would transport me to the Grand Canyon. It's an understatement to say I was beyond excited. I was giddy and needed a truly grand breakfast. So, as luck would have it, I happened to be in the Pine Country Restaurant, home of world-famous pies.Their motto reads: Everyone should have a little pie in the pines and I agreed.

I ordered a mile-high blueberry pie and let me tell you, that piece was lip-smacking good.  Perfect crust- fresh enough to have a bit of crunch, but buttery to the point of melting in your mouth. The berries were sweet but not overly sweet, and the thickness of the juicy filling was just right. Down right yummy.

Townsfolk are regulars at Pine Country and they send strangers who ask for the best place to eat. Of course, the location near the station attracts a number of tourists on its own. Although the Pine Country Restaurant is renown for pies, the other breakfast plates looked mighty delicious, too.

If I lived there, I think I'd be in pie heaven.

Read this and other food blog articles posted on Wanderfood Wednesdays.

Posted by Bylandersea at 7:30 PM 2 comments