Any business that calls itself "the fun place in the middle of a fun town"  sounds like a great place to me. In this case, the lively locale turned out to be the Clear River Pecan Company of Fredericksburg, Texas, in the heart of the Hill Country. German immigrants arrived in 1846 and founded a town which retains many of 1800's buildings and the layout of the planned settlement. An extra wide Main Street harkens back to the need to turn an ox cart, but works equally well for today's cars and shoppers.

Walk into Clear River and find the original wooden floor, antique general store fixtures and sky-high tin ceilings. They give the feel of an old-time soda fountain. Forget Starbucks, drop-in from 7:30 any morning of the week for freshly brewed coffee and warm pastries, like delicate apple cinnamon scones.

At lunch time the menu shifts to enormous made-to-order deli sandwiches on fresh baked bread, or soups and salads. But, the real reason to visit Clear River remains dessert.

Some 35 varieties of homemade ice cream are displayed to look like Italian gelato. But, at Clear River you are served full butterfat ice cream, all made in small batches by hand. These folks also produce specialty ice cream to many of the fine dining restaurants in the region.

Customers pick a creation or combo in a dish or a sugar cone, cake, waffle, chocolate dipped or sprinkled cone. And, if ice cream alone doesn't satisfy your sweet tooth surrender to  the homemade bakery items and hand-crafted candy. Plenty indulge their whimsy by enjoying both a brownie or baked good topped with ice cream. Pure decadence.

I chose a cone of the award winning and sinfully delicious Amaretto Peach and Pecan ice cream, but the Mexican Vanilla ranks as the all time favorite. Both have won prestigious awards in national competitions.

A flat-screen TV over the counters plays "Grease" 24/7 adding to the family-friendly atmosphere. "Our regulars have come to love it," said John Dubea, the affable owner. "They won't let us change the movie."

No John, don't mess with a good thing when it's working or an upbeat website address: www.icecreamandfun.com.

Read this and other food blog articles posted on Wanderfood Wednesdays.
****

Posted by Bylandersea at 4:13 PM 2 comments

Eagle Lodge – Luxuriously PRIVATE
Win a Dream Vacation on PRIVATE Eagle Island
Here's a sensational contest that I hope all my friends will enter.  The prize is a stay at Private Eagle Island, a laid back retreat on the Georgia Coast. I visited over a year ago and you can read my story here.   The house is grand yet homey and comfortable. The ten-acre island and lodge make an outstanding retreat for families and extended family. Don't miss this chance to feel like the rich and famous on your own island.
Capt. Andy Hill invites you to share your best Shrimp Recipe to win a 5-Moon Grand Prize Vacation on Eagle Island. One of the islands in his exquisite collection of www.PrivateIslandsofGeorgia.com , Eagle Island guests savor local fresh ‘wild’ Georgia shrimp, an important ingredient in almost every coastal-inspired dish they enjoy throughout the year.

Eagle Lodge Fishing and Crabbing Dock on the Mayhall River

The most succulent of all the shrimp in the world, fresh wild Georgia shrimp are caught daily in turtle safe nets off the white sandy beaches of coastal Georgia.
Eagle Island, Georgia
www.PrivateIslandsofGeorgia.com
(912)222-0801
Capt. Andy Hill

Posted by Bylandersea at 7:14 PM 0 comments


I traveled to Texas to photograph wildflowers and taste wine, but ended up into brats and beer. Not to say I didn't spy a few bluebonnets, even with drought conditions, and sip some vino, but Fredericksburg taps into authentic German food and ale. And das ist gut.

The small town in the desirable Hill Country dates back to 1846. A group of German immigrants bought land packages and settled into what became a planned community. Today, the Germanic heritage retains a strong influence over lifestyle in  the region. As you might expect, the streets and shops pass the white glove cleanliness test and events run with uber- precision.

You'll find over 70 restaurants from fine, elegant dining to Tex-Mex, BBQ, Italian and other ethnic varieties and, of course, German specialties. I first stopped at Der Lindenbaum restaurant on Main Street for a late lunch. I ordered a Reuben which arrived with sauerkraut on the side, not on the sandwich. Hmm? I promptly opened it up and placed the cabbage topping inside the rye bread along with the corned beef and melted Swiss cheese. A meaty and tasty afternoon treat. 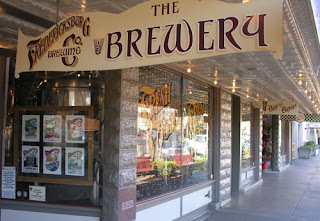 Dinner found me at the friendly Fredericksburg Brewing Company, also along Main Street and in the heart of the historic, downtown shopping district. The on-premise micro-brewery claimed a gold medal at the 2008 Great American Beer Festival Competition, the largest beer competition in the United States. The establishment has twice been proclaimed the Best Brewpub in Texas, by Texas Monthly, and won silver and bronze medals for their Porter and Red Ale.

The menu features beer samplers and I was ready to raise a stein. (Faithful blog readers may recall it took two trips to Germany to convert me from a wine devotee to a robust bier enthusiast.) I tried a three-flight series named: Not So Dumb Blonde, Enchanted Rock Red Ale and the Pioneer Porter. The golden blonde ale tasted too light for my preference- like a Kolsch that I tasted in Cologne. I thought the Red ale was divine with a full, rich malty tang. The Porter sipped smooth but I preferred the Red.

When in Fredericksburg I wanted to try honest Bavarian fare, so I chose the Sausage Sampler of knackwurst, bratwurst, and pepperwurst while a dining partner ordered Jager Schnitzel - a breaded pork cutlet topped with Bavarian-style mushroom sauce. Both smelled homey with a warm spiciness and proved very filling. While we needed no dessert, we nonetheless ordered a peach cobbler to share.

An atmosphere of frolic fills the brewpub, a Biergarten stands ready at the rear of the building-- sometimes with a German ohm-pa band-- and the brew tanks shine in the open bar arena. The aura of Munich prevails.  Prost!

And, one more terrific tip about Fredericksburg: sidewalk consumption is allowed so you can take your cold brews on your downtown stroll. Now that's Texas hospitality and German ingenuity.
Read this and other food blog articles posted on Wanderfood Wednesdays.

Posted by Bylandersea at 8:58 AM 2 comments

Celebrate The Borgia's and Feast

Last year saw the end of my beloved series The Tudor's on Showtime, but I was thrilled to see the they were producing The Borgia's- that infamous Renaissance family.

Showtime and Macy's got together to produce a Borgia's Feast and I thought I would try one of the recipes to savor during the premiere episode on Sunday, April 3rd.

I chose a dessert inspired by Lucrezia Borgia and created by the Food Network's Cat Cora. The recipe is for Sweet and Spicy Chocolate Budino which is really a small, very moist chocolate cake. Sour cherries are served around the dessert which is topped with a white chocolate and ginger sauce.

If Lucrezia was known as deliciously sexy this recipe is titillatingly luscious. Very smooth, pudding like, with a warm chocolaty taste and a divine sauce.

The official recipe can be found at www.originalborgiasfeast.com. Below is my adaptation for half the recipe and a few minor changes.

•    1 can of sour cherries, mostly drained but save some of the liquid for
garnishing the plate

Grease or spray a 12-cup muffin tins with vegetable or canola oil. Wipe out excess oil with a paper towel. Set the tin aside.

Melt softened butter in a large bowl set over a saucepan of hot water (double boiler) over very low heat. As the butter is melting, grate the chocolate or chop it into small shards with a chef's knife. Once the butter has melted, add the chopped chocolate and allow the chocolate to melt slowly, stirring until the mixture is smooth and the chocolate is completely incorporated. Remove the bowl from the hot water and set aside.

In a separate bowl, gently whisk the whole eggs, egg yolk, sugar, cinnamon, chile powder, and flour. Mix until all of the ingredients are well incorporated.

Spoon the batter into the prepared muffin tins, filling each cup three-quarters full. Bake for 11 to 12 minutes. The edges will have just begun to pull away from the pan, and the top of each budino should still look moist and shiny at the center. Remove tins from the oven and allow them to cool for 10 minutes. While the tins are still warm, place a baking sheet over the top of the muffin tin and invert it. Carefully lift the muffin tin to release cakes. Transfer the cakes to a serving platter or individual dessert plates. Budino is at its best if served warm, but is also delicious at room temperature. Serve with warmed candied ginger white chocolate crème anglaise poured over the top, some sour cherries around the base of the cake as well as right on top.

In a small heavy saucepan bring cream, white chocolate, and candied ginger just to a simmer over low heat, about 10 minutes. Do not bring to boil.

Meanwhile, in a small bowl whisk together yolks and sugar until smooth and evenly combined. Add hot cream mixture little by little, whisking continuously, and transfer custard mixture back to saucepan.

Cook over medium-low heat, stirring constantly with a wooden spoon, about 5 minutes. Can be prepared ahead and refrigerated/covered, but bring to room temperature before serving.

Posted by Bylandersea at 8:09 PM 0 comments